"Make way for the King!" How to deal with conceited people

My friend told me a story about an incident at her apartment where another resident parked a junker car in my friend's assigned parking space. My friend left a note in the resident's mailbox....not a rude note, but one that asked very nicely for the resident to move the car so that she could park in her own assigned spot. This is where the proverbial sh*t hit the fan. The resident called the police and made a fuss about my friend threatening her, demanding my friend be arrested, and other ridiculous claims.

My friend is the type of person that doesn't like to cause or deal with conflict. so this is a hard situation as the other woman taunts her with phrases like "I'm not moving my car, what are you going do about it?" and "Its not over yet, Bitch". It has gotten to the point where my friend peeks out her door before leaving her own apartment, afraid that the other woman is waiting around, to taunt her more. The other resident has even gone so far as to rally other neighbors on her side, by padding the story, making my friend out to be the evil one. They gather around and laugh at my friend as she tries to find a place to park her car. They make it known that they're in control, and that everything works on their terms.

After hearing my friend's story, I was saddened. I too was there many times, tiptoeing around people not to cause conflict. I knew what it was like to have my self respect shattered to the point where I actually thought I was less than what I really was. I thought about how I allowed it to happen, and though about the hard work I put into patching my confidence and self respect. "You shouldn't have to live like this...." I asked my friend. "Where's the apartment manager in all this?"

"I don't know. I think I'm just going to move to another apartment. I think she waits for me every day to let me know there's nothing I can do about it...." she replied.

She looked at me in a puzzled look. "This woman knows you're avoiding her." I added. "She knows she's got people on her side....she doesn't care that her side of the story is all lies. She's an energy-hog, and it seems that she thrives on the knowledge that she has power. But, the power isn't hers....its YOURS. She's taken your personal power. And, the more you feed it with your fear, with your checking if she's out there before you leave for work, when you avoid eye contact with her and rush away, you give her more power....and, feel more and more drained in the process".

Being that my friend is humble and non-aggressive, I continued with this comment: "I'm not talking about you turning into a hard-shelled "don't mess with me" person,... that's not what I mean about "power" here. Any amount of self-respect, confidence, and feelings of security you have, that's your power. You've allowed her to take a lot of it.....trick is, to gain it back."

"...But how do I not give it away? How can I get it back from this arrogant conniving lady?" my friend asked.

In a nutshell, this is what I suggested, to deal with self-absorbed energy hogs, especially if they make your life very difficult and start to make you question your self worth:

My friend now is confident, that if she does move from her apartment, that its based on  her own decision, instead of being forced out by an arrogant bully.  I only hope, that her personal power continues to be gained back from the bully, and continues to grow by leaps and bounds.

*This blog post also published on my other blog, "Don't Fight The Tao" http://dontfightthetao.blogspot.com/2010/09/make-way-make-way-for-king-how-to-deal.html

Self absorption: Saturated in your own junk......

Leave Ego aside. If we are too self absorbed,

we become like a wick saturated in our own oil,

yet not letting others light the lamp.

This results in functional, yet useless lamp.

Okay, I'll admit....I've been guilty of "self absorption". We all are self absorbed to some degree or another. Thinking about our own needs and desires is a motivating factor to keep us plugging along and going forward with our goals and aspirations. This is good! If we lose that sense of self-importance that motivates us, we would sit around and become stagnant.  However sometimes we all go through phases where the self-absorption begins to turn too severe selfishness. When we forget about everything else and make the world revolve around us, we miss out on a lot of things.

During a self-reflection after one of my usual meditation sessions a few months ago, I came upon the realization that a period of time had been based around my self-absorption, instead of what I really *am*.  Common thoughts in my head during this time were "What's in it for ME?" "How do I benefit?" "What do I get if I do this or that?".  I found myself getting frustrated or impatient when things weren't happening fast enough.

As I arose from my meditation bench, I asked myself several things:

1.What do I truly enjoy in life and with other people?

2. What exactly are the needs, goals, and desires that I need for myself?Whtat do I feel is "missing"?

3. What do I consider as "reward"? Will the world end if I don't get the exact rewards I seek?

4. Can I still be able to share with others, and still attend to my needs, goals, and desires?

Also, listen to yourselves....in any situation, listen to how many times did the word "I" come into thoughts. If you find yourself asking "What's in it for me??", acknowledge it and think about your next step. Think outside your box and see things from the outside looking in. Think about the other person and/or their situation as well.  I'm not saying that you should sell yourself short. I'm saying "Get your Ego out of the equation". Or...."Get your head out of your...." Well, you get the picture.

Although I never outwardly said "What's in it for me?" whenever situations or opportunities arose, I did find myself thinking it a lot. Things became motivating factors only if there was reward. For a bit of time, I lost a little bit of who I really was.  I decided to re-invest my time in doing what I enjoy and sharing with others....all the while still attending to my needs and goals. I remembered that giving away my time was not necessarily "wasting" it. I remembered that the world wouldn't end if I didn't get rewards all the time. I remembered the joys of knowing that great people are blessings in our midst, not merely network spokes on the benefit hub.

We all can benefit from toning down our self-absorption.......You might be surprised that when we give ourselves for the greater good of others, that the benefits we seek show up on their own.

In the next blog entry, we'll talk about how to deal with self-absorbed "energy hogs".

There once was a wise sage who wandered the countryside. One day, as he passed near a village, he was approached by a woman who saw he was a sage and told him of a sick child nearby.  She beseeched him to help this child.  The sage came to the village, and a crowd gathered around him, for such a man was a rare sight.  One woman brought the sick child to him, and he said a prayer over her.

"Do you really think your prayer will help her, when medicine has failed?" yelled a skeptical man from the crowd.

"You know nothing of such things!  You are a stupid fool!" said the sage to the man.

The man became very angry with these words and his face grew hot and red.  He was about to say something, or perhaps strike out, when the sage walked over to him and said:  "If one word has such power as to make you so angry and hot, may not another have the power to heal?"

And thus, the sage healed two people that day.

Found this at www.cuke.com  ...... A fun statue of Ronald McDonald, with hands in Gassho!  This is too cool! 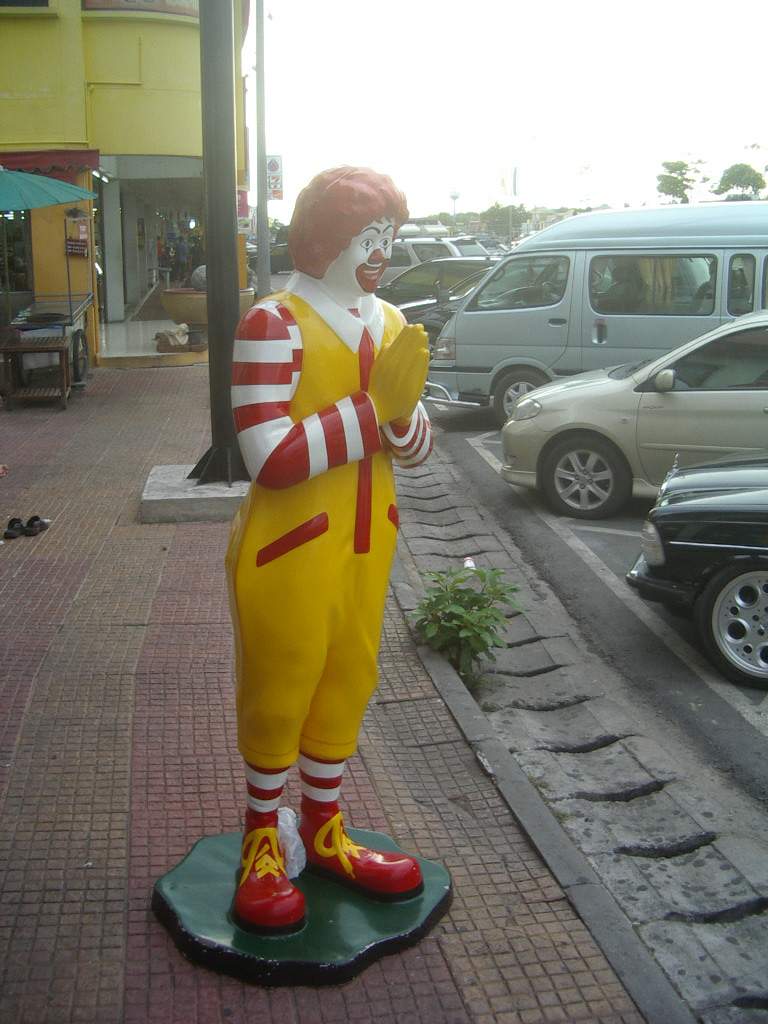 Irashaimase!! We hope you'll stop by often to check on news, my blog posts, interesting links and information about healing and health, and fun stuff as well!

If you'd like to discuss things in detail, please check back at this site soon for our discussion forum, where anything about health, wellness, and spirit may be discussed!